A New Title (or two)

Last weekend was the EKKOC (Evelyn Kenny Kennel and Obedience Club) show held down in Springbank just outside of Calgary, Alberta.

Finn was not only entered in his usual Advance/Excellent Rally, but he was also scheduled to do two days of Scent Hurdle racing on the Friday and Saturday evening.

Now, I hadn't posted about Finn's very first Scent Hurdle trial in Edmonton so I'll zip through our experience there first.

The first weekend in June was the Edmonton show and Ready, Scent, Go's debut in Scent Hurdle racing. I was pretty excited as Finn had been absolutely stellar at practice and the fun match we had gone to.
His scent discrimination was dead on, and he seemed to have no trouble running while dogs were in the lane next to him.  So I decided to head up for Scent Hurdle only and not to enter him in any Rally so he could conserve all his energy.  A three hour car ride later and we arrived at 4pm to find out that racing probably wouldn't start for another hour or two.  I walked Finn around and then put him away in his crate so I could go browse the Vendors.

Finally 6pm rolls around and we are finally ready to start the racing.

I couldn't help but be nervous and at the same time I was incredibly excited.  Our team was so confident that we would rock, when things started to fall apart we weren't prepared for it.  Needless to say Finn was one of those things that fell apart.  Whether it was my fault for not bringing him out and getting rid of that excess energy that built up during the car ride up, or it just being a new place and a new sport, Finn's first race had him running across to the other lane to go investigate the papillon on the other team.

The whistle is blown and our team gets a NT (no time).  The next race, Kelly and Tula line up in front of us and we go second but Finn is still too amped up and takes out the second jump on his way down.  Mind you, he did get the right dumbbell but since the jump was knocked down it was another NT for our team.

So the first race was pretty discouraging and it didn't help that the team was a bit harsh and intimidating.
The second race was against one of the local Calgary teams who we had a fun match with and Finn did fine.
He ran first both races, and was quick to bring back the correct dumbbell to me.  As much as we lost both heats and the race, this got our spirits up.  Just in time for it to be squashed. lol

The third race was run against a subdivision group of the first team we raced.  But this time we had to switch sides and run on the other lane.  I didn't even think anything of it because we had practiced so much and we do similar exercises in Flyball.  Well the whistle blew, Finn runs down, grabs his correct dumbbell and runs up alongside the hurdles on the side closest to the other lane and right before the start line crossed over to go give his dumbbell to the other team.  The whistle was blown for us to stop and that was when the bad news was delivered.  Two cross overs by the same dog and that dog is out for the remainder of racing for that day.  Seeing as though we only had four available dogs to race, our team was disqualified and had to sit out of our final race.

I was so upset.  I had no idea what happened to my amazing dog at practice.  I also think that had the second cross over happened while we were racing a team we were familiar with, it wouldn't have been as upsetting but the team we were against was rude and a bit mean.

I almost considered just dropping out of scent hurdle but thanks to the encouragement of a team mate, I hung in there and I am so glad I did.

We ran two days of racing and our team, Ready, Scent, Go! ran clean each race.  Finn didn't even look at any of the dogs on the other teams!  I was so proud of him.  He raced down, got his correct dumbbell and booked it back to me!

We moved Finn to running last just in case I felt like I needed to hold him back and I'm okay with that.  I'd like to eventually see if he could run second or third just to have the opportunity to scent discriminate a bit more, but I'm in no rush.

For now, I managed to grab a few pictures of Finn during our practice tonight.  Enjoy! 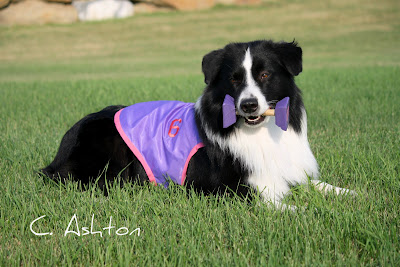 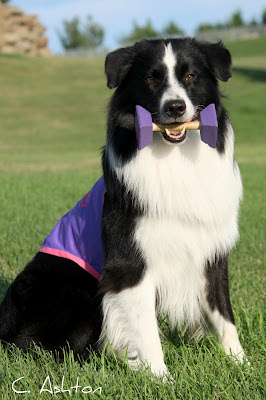 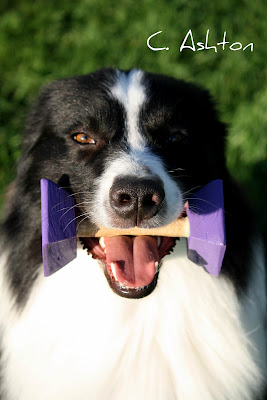 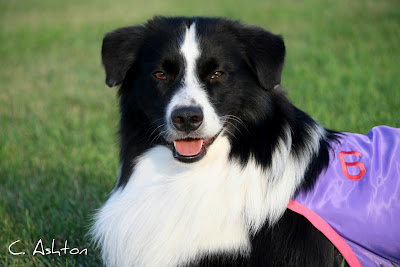 Even in our team color of pink and purple Finn still manages to look handsome and masculine!
Posted by InfiniteFinn at 12:37 a.m.